Kuala Lumpur – This weekend marks the second leg of this year’s Formula 1 World Championship: Malaysia. The tropical setting always offers extreme heat and humidity for the teams to compete in, leading to often surprising results. This year’s Grand Prix however is overshadowed by the tragic disappearance of Malaysian Airlines Flight 370, the passengers and crew of which are being honoured this weekend by the teams.

Practises 1 and 2 saw the same general issues marring the various car’s performances. Neither of the Lotuses nor Force India’s Sergio Pérez (MEX) set lap times in P1. Meanwhile, the Mercedes, McLarens, Ferraris, and Red Bulls held the upper echelons of the leaderboard throughout most of Friday and Saturday. P1 concluded with Lewis Hamilton’s (GBR) Mercedes on top. Practise 2 was the only one of the 3 to be fully televised here in the United States by NBC Sports. Hamilton’s lead was taken by his teammate Nico Rosberg (GER). Practise 3 was once again a Mercedes 1, 2. Close behind the silver arrows came the Ferraris, Red Bulls, Force Indias, and Williams.

Qualifying however cut the tempo of the weekend short a bit as what the NBC lads called a “monsoon” sailed over the track at Sepang. After a good 45 minutes, as Q1 began, the teams went out in a variety of mostly intermediate tyres, which proved to be troublesome for the still quite wet track.

Tyre trouble became the main bane of the teams as they struggled to set good qualifying times for tomorrow’s Grand Prix. The more woeful incident of Q1 was Marcus Ericcson’s crash at the end of Q1, which led to a red flag and a premature end to the session with 0:36 seconds remaining on the clock. 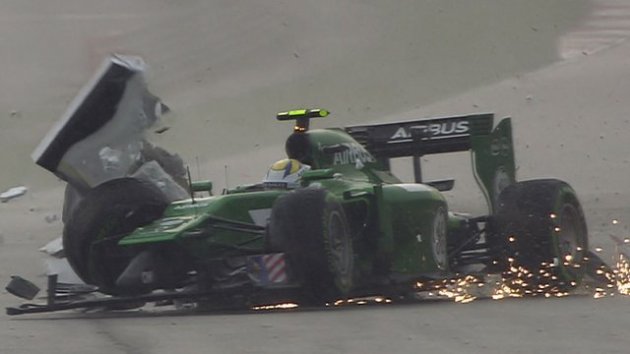 Q2 was equally final for the grid placements for the two Williams of Felipe Massa and Valtteri Bottas, who placed 13th and 15th respectively. Russian rookie, Daniil Kvyat just barely remained at the top of the elimination group at the end of Q2. His teammate Jean-Éric Vergne was able to advance to Q3, qualifying in 9th.

Q3 was marked by a bit of a hurry in the end to get the laps in before more rain hit the circuit. The two McLarens had had their own tyre issues in the previous two qualifying sessions, having chosen to go on the intermediate tyres and soft tyres in such an order that was counterproductive to their own qualifying times.

What should be noted is just how much slower the qualifying times of this year’s Malaysian Grand Prix are in comparison to last year’s, with Lewis Hamilton taking pole with a time of 1:59.431 as opposed to Sebastian Vettel’s 2013 pole a full 9 seconds faster at 1:49.674. The grid positions are as follows: