Kansas City – One of my favourite songs on the Chieftains’ 40th Anniversary album Wide World Over is the Redemption Song by Ziggy Marley. It’s a song that has stuck with me since the so named Kings of Irish Music released it 11 years ago, as has the concept that music can redeem. My personal redemption song isn’t your average 4 minute 30 second piece, nor is it something written in the past 50 years. It’s Mahler’s Symphony No. 8. 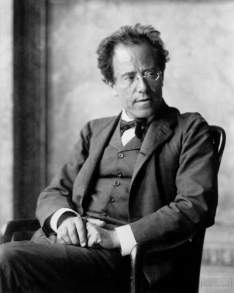 I first heard Mahler’s music on NPR’s Weekend Edition early one Saturday morning sometime in about 2009 or 2010. The San Francisco Symphony was making a series of recordings of all of the great Austrian composer’s symphonies. They played excerpts from his Symphony No. 6 on the air, but I avoided Mahler for years, despite my liking what I had heard on the air, because I was told that his music was “quite depressing.” It wasn’t until Summer 2011 that I bought my first Mahler album, the New York Philharmonic, Leonard Bernstein recording of the Symphony No. 1 and the Adagio from Symphony No. 10. I bought it specifically to take out into the fields on my iPod so I could have something to listen to whilst painting fences in the pastures. From then on, any chance I got to listen to some Mahler, I took it, attending every Mahler concert performed by the Kansas City Symphony since. It is a blessing of sorts to be living in Kansas City right now, because the KCS’ conductor Michael Stern is certainly one of this country’s great living Mahlerians.

Mahler’s 8th, demotically known as the Symphony of a Thousand is just that, a symphonic work in which my favourite of the Germanophonic composers pulls out all the stops and lets his very heart and soul sing. It begins with the Veni Creator Spiritus, a prayer commonly chanted around Pentecost in the Roman Catholic Church, my sort of spiritual lifelong home.

However, the real redemption comes in the second part (Movements 3 and 4). It is here that Mahler’s music takes on the story of the Redemption of Dr Faust. Contrary to M. Gonoud’s famous grand opera about the aforementioned doctor, in Mahler’s version, it could be said Faust is redeemed rather than falling back into sin. Whenever I listen to Mahler’s 8th, I always come out on the other end feeling empowered and eased, like I do when leaving the confessional or after spending time in the Adoration of the Blessed Sacrament. It’s a calming sort of thing, which is rather odd considering the symphony ends with a very loud and quite triumphant sound. This is one piece that, if I ever were to get into conducting, I’d love to conduct. And yet, it takes quite a bit more to conduct than your average piece of music.

So, on days when you’re not feeling quite up to your normal, when you’re stuck in that bunker on the bottom nine, why not find a good recording of Mahler’s 8th, or really any of his works (except perhaps the 6th, which is rather sad), and have a listen. It’s as close as you’ll ever get to hearing a man’s soul cry out in joy and peace.