Shoreditch, London – After 6 and a half hours in the air (8 and a half hours on the plane thanks to a great JFK traffic jam), I at long last made it to London-Heathrow yesterday morning (15 June) at 8.00. The flight was quite interesting, and didn’t have much trouble after we got off the ground. About two hours into the flight, for whatever reason I had the urge to lift the window shade just a bit. This “sudden urge” turned out to be quite rewarding, as I got an exquisite photo of the sun just beginning to rise over eastern Greenland. 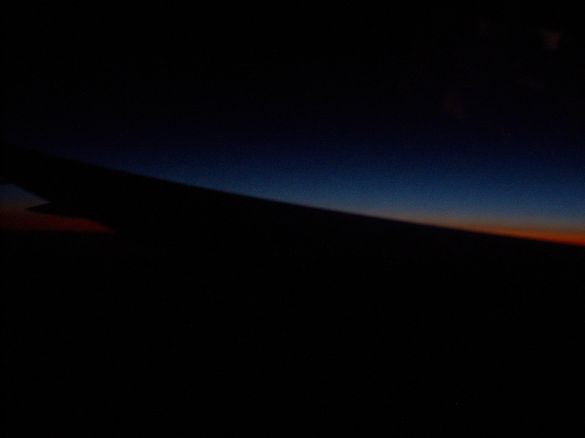 “This “sudden urge” turned out to be quite rewarding…” 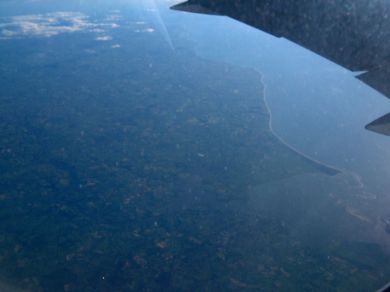 The Irish coast in Co Wexford from the air. 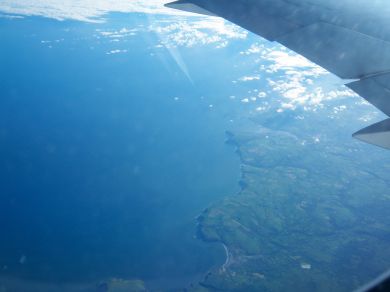 The Welsh coast near St David’s from the air.

A couple hours later we began to fly over an tír na mo aithreacha (the land of my fathers), Éire (Ireland). We flew in a straight line from about Ennis to Wexford, and then crossed the Irish Sea to another country of which I have heritage, Cymru (Wales). Over Wales, we flew from about St David’s in the west to the mouth of the Severn in the East.

I landed in London, as aforementioned, at 8.00 in the morning and made it through customs by about 9.00. There at Heathrow’s arrivals meeting place, I met up with the ISA London office, and ended up staying there in the arrivals area until 12.00 Noon when we as a group at long last left for our housing. It took us a good hour to drive across London to our building. My room is quite nice actually. It’s a bit on the small side, but is quite comfortable and cozy. The one complaint that I have at present is the lack of air movement, which will soon be redeemed by a fan, which hopefully I’ll be buying at Argos soon. My room is one of six that are grouped together in a flat, which is on the first floor (ground floor in US English) of the building. There are three other people living here with me, two of which are with ISA, and the third with another programme. We share a kitchen, and the third person and I share a toilet (bathroom). 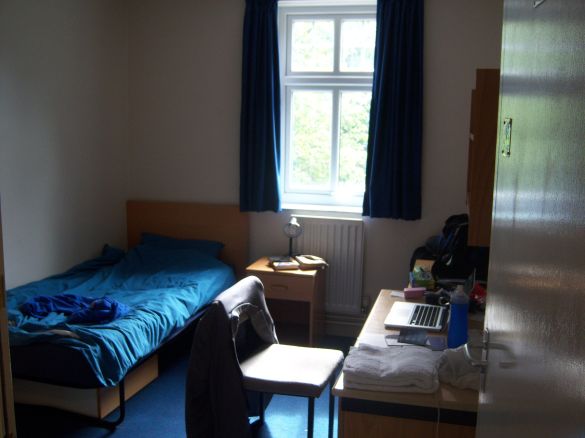 “…but is quite comfortable and cozy.”

As I was originally typing this into WordPress last night at about 20.00, I began to feel a bit drowsy. However I was determined to continue with my typing and complete the article before bed. But alas, my computer, being the wise soul that she is (she as in how ships are called she or her) decided to go to sleep as well and stop working properly. So, I too retired for the night. I first woke up around 22.00, thinking that it was the next day already, forgetting in my exhaustion that the Sun stays out here until about 22.30 during the Summer months.

I woke up the next morning at my 7.30 alarm quite refreshed and free from the shackles of sleepiness. After showering (they use two handles, one for hot and one for cold water, thus it was hard to figure out the balance) and eating a light breakfast of a NutriGrain bar, I made my way up to my new parish church, St Monica’s in Hoxton. The Parish is an Augustinian one, and their Mass was quite nice. They had a few songs, without the need of a cantor, and chanted all of the prayers. There were a couple differences, like the priest asking God to “pencil out our sins” rather than forgive them, one which I found quite charming, but otherwise it was much the same as most of the Masses that I’ve attended back in the States or in Ireland. However, I had to leave early and miss the talk on the parish fundraiser as I was due back at the hall of residence for the group meeting for orientation.

For orientation we took the tube to Oxford Circus, which is the closest stop to the University of Westminster’s Regent Street Campus. However, just about 3 blocks south and 1 block west of the University was our true destination for that moment, the ISA London offices on Great Portland Street. The ISA staff have been truly welcoming of all of us on this trip, and one gent from the office, Tom, even took a good hour out of his day yesterday to help a fellow student, Jon from the great state of Wisconsin, (home to Michael Feldman (of NPR fame) and one of my favourite burger places, Culver’s) and I in getting UK mobile phones. We were able to find very cheap phones at the Phone Warehouse for £4.95 for the phone and £10.00 for the plan with O2.

After orientation, Jon and I took a bit of an adventure and made our way down Oxford Street. I told him about a store where he could probably be able to get a much needed electrical adaptor, and we headed in what I thought was the right direction. Turned out I was a bit off in my geography, and we ended up going the wrong way by a couple blocks. So, after turning around and heading back west, we eventually found the store I was telling him about, Selfridge’s. Now, I wouldn’t have even heard of the retail giant had it not been for PBS broadcasting the ITV minseries about Selfridge’s founder, Harry Gordon Selfridge, on the Masterpiece series. We made our way into the store, and soon found ourselves in electronics, where Jon got his adaptor, and I met a very friendly and interesting clerk, who just so happens to be planning a North American vacation, which includes a drive from DC to Toronto. I wished him luck, and we continued onwards and upwards (literally in that sense as the electronics department is in the cellar) to the foodhall, which is on the ground floor. We ate at this nice sort of cafeteria style eatery, simply named Eat, where we both got the store’s signature beef sandwich, which was basically roast beef on bread of your choice, with whatever sort of mustard you wanted on top. Now, I’m not a mustard lover, and when ordering I thought by asking me if I wanted, “American, English, or French” they were talking about cheese. So, thinking English meant a nice cheddar, I spoke thus, and to my horror found mustard squirted onto my nice beef sandwich. I ended up eating the beef that didn’t have the mustard on it, and only the bottom slice of bread, as it also was naked in a sense.

We returned to the ISA office by way of it’s neighbour, the BBC Broadcasting House, and sat around until a tour bus came for the group. We took a nice tour of the major sites of London: Buckingham Palace, Westminster, and the City, and returned to our building forthwith afterwards.

I must say one of the most interesting parts of my day has been what has just happened prior to me sitting down to write this, grocery shopping in the UK. It’s just that bit different from shopping in Kansas City that I just had to mention it. See, I was surprised at just how little meat there was for sale on the shelves. Now of course, this was a smaller local grocer (a branch of Sainsbury’s to be exact), and so they wouldn’t have quite as much as a larger place, but it did surprise me. I ended up spending about £13 on food for the next couple of days, buying bread and preservatives for sandwiches, some pasta and a tomato basil sauce for dinner sometime (keeping with the Pasta & Prayer tradition), and other stuff as well.

So far this has been quite the exciting and interesting beginning to my time in London, and it certainly makes me look forward with anticipation at what is to come. So, for now, tá.

2 thoughts on “Settling down in London”